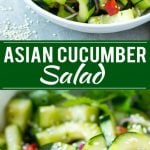 This recipe for Asian cucumber salad is sliced cucumbers and colorful veggies tossed in a zesty sesame dressing. The perfect quick and easy side dish!

Marinated cucumber salad is a cool and refreshing complement to almost any meal. This Asian style cucumber salad utilizes soy sauce and sesame oil to bring lots of flavor without a lot of work. 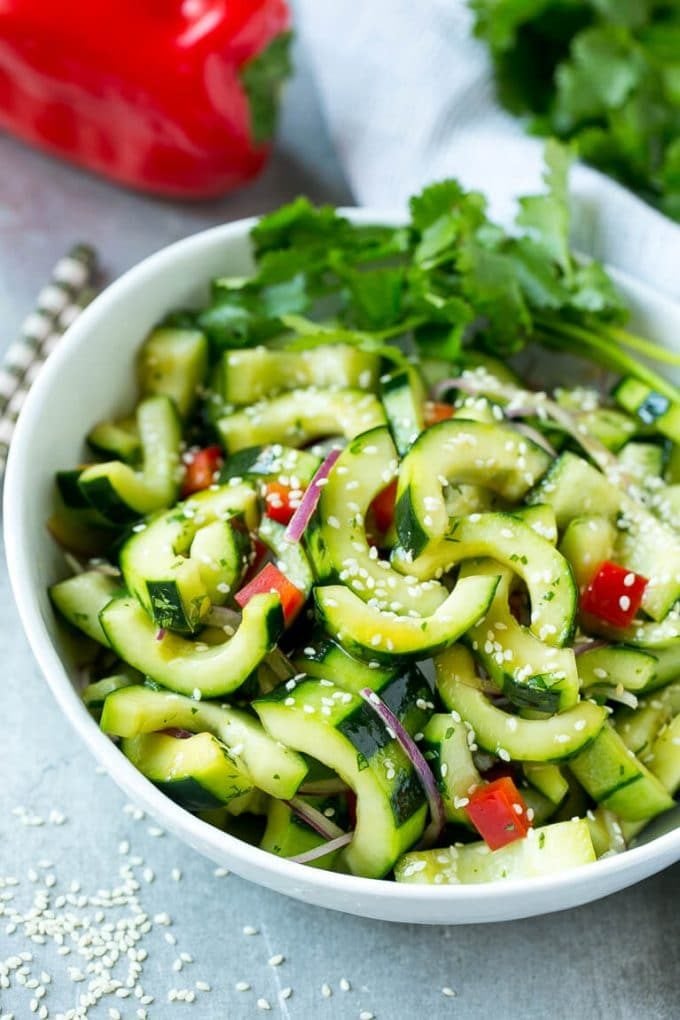 Who doesn’t love cucumbers? They’re mildly flavored, super refreshing and are amazing in so many different dishes. This Asian cucumber salad is one of my family’s favorite sides, you can serve it alongside grilled chicken or fish and it makes the perfect picnic or potluck offering.

How to make Asian cucumber salad

The first step for this salad is to select your cucumbers. Typically there are three different types of cucumbers at the grocery store. You’ve got standard cucumbers, the long plastic wrapped English cucumbers, as well as those cute little Persian cucumbers.

I run a vegetable peeler around each cucumber to make a striped pattern, which looks pretty and removes some of the waxy skin. The cucumbers are combined with red bell pepper and thinly sliced red onion to form the base of the salad. 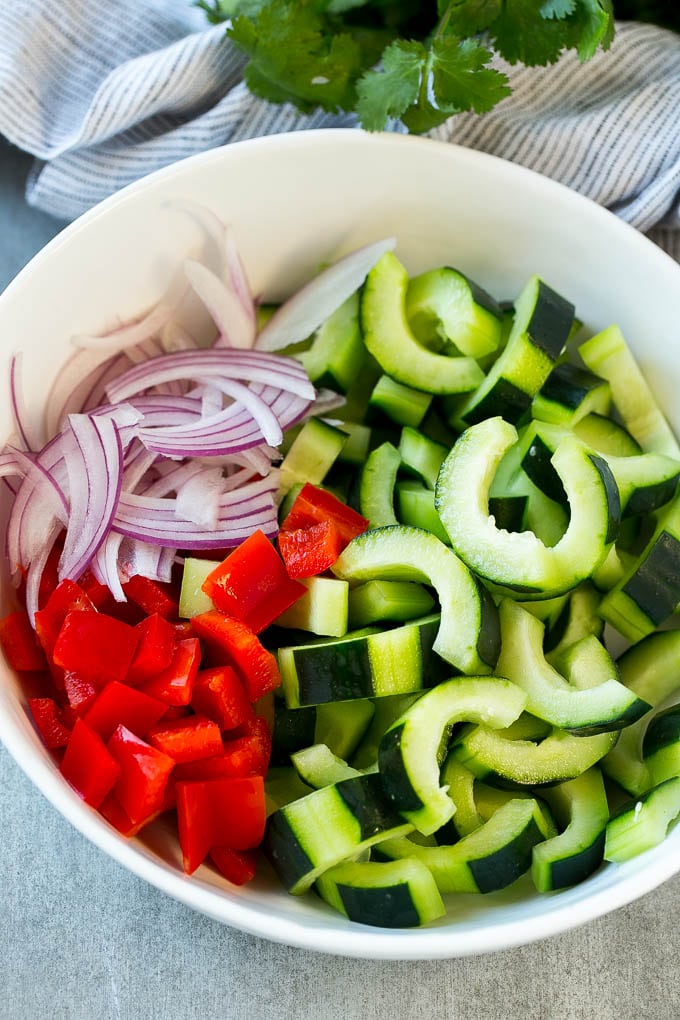 The dressing is a simple combination of soy sauce, rice vinegar, honey and sesame oil and takes just minutes to put together. Add some herbs and sesame seeds, then toss and enjoy! 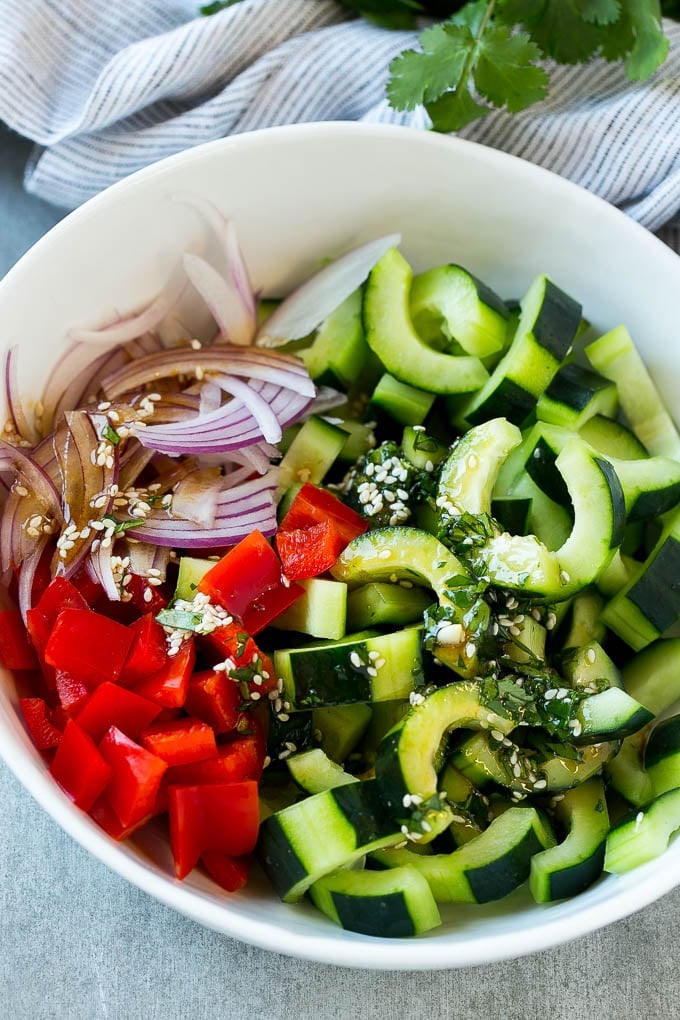 This Asian cucumber salad can be made a few hours in advance, but just be aware that the cucumbers will release liquid as they sit in the fridge, so your dressing might be a little thinner in consistency when it comes time to serve your salad. 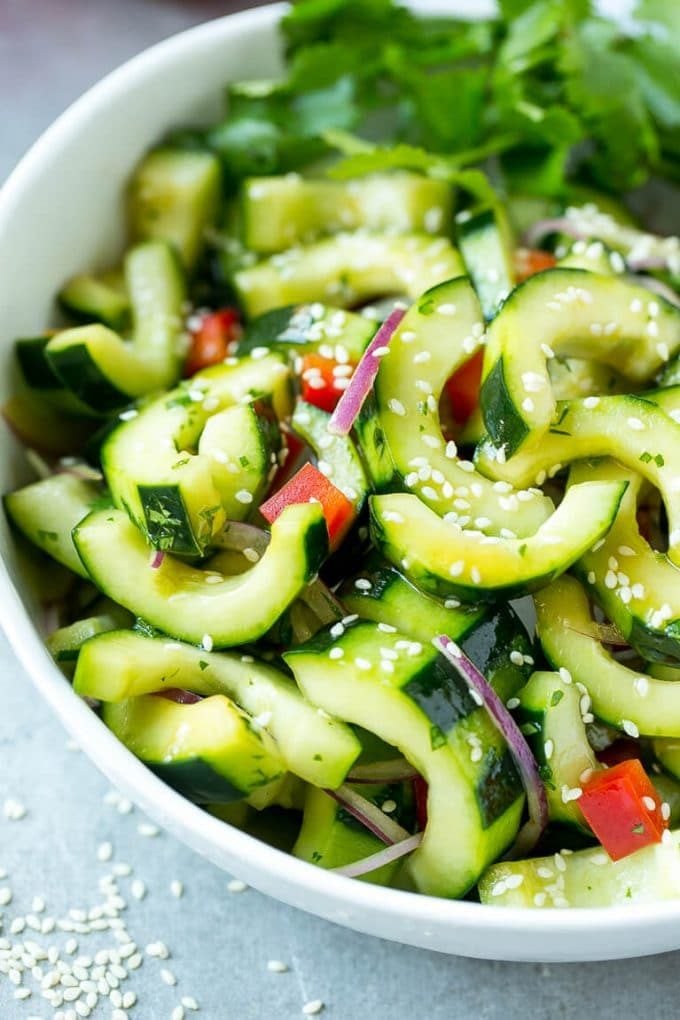 This recipe is easily customizable, you can add other veggies like edamame, shredded carrots or snap peas, and change up the dressing by adding ginger, sriracha or hoisin sauce. So many possibilities! 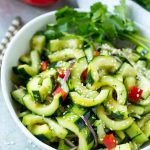 This post is sponsored by P.F. Chang’s Home Menu as part of the Mom It Forward Blogger Network. Thank you for supporting the brands that make Dinner at the Zoo possible. This post was originally published on January 11, 2017 and was updated on March 19, 2018 with new content.